Spindle turns off whilst cutting

Spindle does not power

Door on G-Code monitor is activated

This refers to the homing movement of the beam towards the home end of the bench, not stopping at the desired home position, and entering a continuous stall.

When homing, the first operation drives the beam towards the home end of the bench.

A reed switch sits on the lower beam, and a magnet sits in the home end plate of the bench.

In the rare event that the reed switch is not triggered, the beam will not know that it has reached the home position and will continue to drive the beam into the legs, causing a loud stalling noise until the machine is manually stopped, or the machine times-out after several tens-of seconds. This symptom is referred to as a failed home switch.

The machine will not have left the factory with this fault, because it would have not been able to complete final test without the homing switch operating correctly. But if a problem is witnessed in the field, there are a few possible causes for the failure - likely due to damage of some kind (either shipping or accidental misuse), either to the magnet or the switch.

Remove the bench panel nearest the home end - this will make inspection simpler.

Are there any components that are preventing the beam from getting to the home end of the bench? Is the beam genuinely stalling against a blockage?

With the power off, manually push the beam towards the home end of the bench.

Make sure that the beam can reach the end of the bench: the plates of the lower beam should be able to touch the legs of the bench completely. 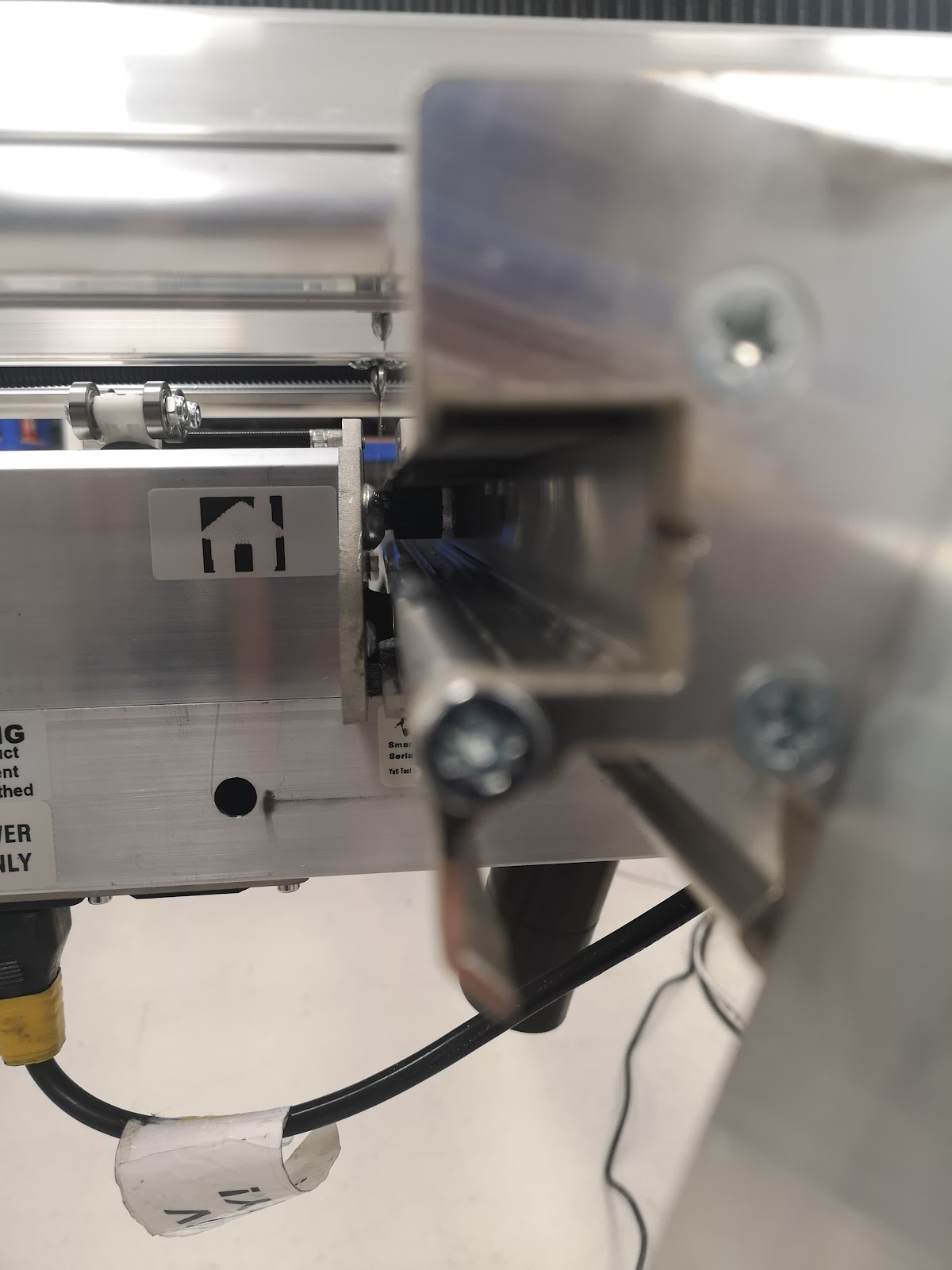 Is the home end magnet present?

Visually check that a magnet is present.

Is the magnet intact?

A damaged magnet (look for cracks or debris) may not be able to generate enough of a magnetic field to trigger the reed switch. Offer up a piece of ferrous metal to the magnet (it should hold the weight of a metal washer.)

Slide the beam away from the home end to a position where the reed switch can be easily inspected.

Remove a bench panel to view inside.

The reed switch is permanently damaged. Most likely this is due to direct hit, or excessive vibration in transit. Contact your reseller with the diagnosis.

The switch may be operating correctly or intermittently.

If the switch is only operational intermittently:

In the PRO app, go to the settings tab and look at the status monitor.

Any values after the Pn: section represent which switches are getting triggered (if the symbol does not appear, it means the switch is not triggered).

Offer a magnet up to the home reed switch.

This should trigger an alarm screen: in later software versions you can see SmartBench’s status in the alarm report: with a magnet next to the home reed switch, the status should include a “y” symbol after the Pn:.

In earlier versions, you may have to press “Return” to get back to the GCode monitor, and then press “Reset” in the sidebar to see the status update. With a magnet next to the home reed switch, the status should include a “y” symbol after the Pn:.

If there is no alarm screen

There may be an issue with the GRBL settings. Press the “Settings” button next to the GCode monitor, and in the output check that $21=1.

If it does not, enter “$21=1” into the textbox at the top of the GCode monitor, and press enter. Then repeat the magnet test to see if the reed switch responds.

If you have been sent replacement Y limit switches, they can easily be replaced.

Remove the 2 hex bolts on the top side of the Y limit switch bracket, and the single PZ1 screw on the underside using the correct tools. You can then remove the bracket, the switches are attached to the loom with a black connector.

Replace the switches and re-fit ensuring the wires are connected to the correct switch. as on the image below Any values after the Pn: section of the status monitor represent which switches are getting triggered: